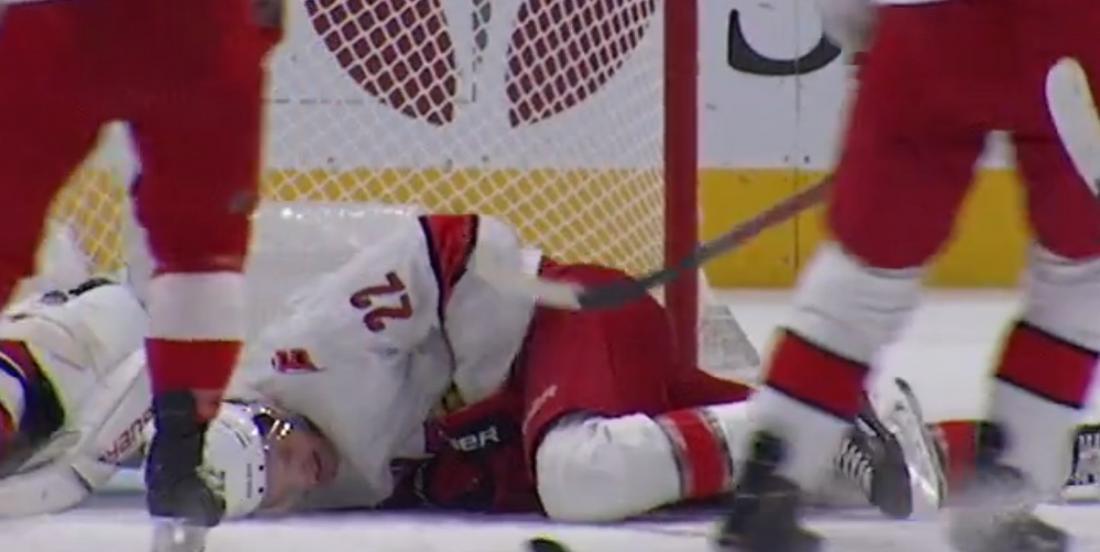 Brett Pesce goes down after taking a slapshot right in the jewels!

You can not help but wince in pain at this one.

On Sunday night the Carolina Hurricanes were taking on the Detroit Red Wings and during the game's second period things went terribly wrong for Carolina Hurricanes defenseman Brett Pesce. There is simply no way to sugar coat this one, Pesce got absolutely blasted in the area of his jockstrap and it looked like he might as well have gotten shot the way he crumpled down to the ice in absolute agony.

The incident happened when the Red Wings were charging into the offensive zone and 22 year old Red Wings defenseman Filip Hronek was set up perfectly for a one timer from the blue line. Hronek looked like he got all of it as well and he fired a laser off of his stick towards the Hurricanes net, but there was also a crowd of bodies in the way of his shot. Unfortunately for Pesce it was his body that the puck found and as I stated before it struck him directly in the groin area, causing him to immediately collapse to the ice. Unsurprisingly all of the guys around him stopped immediately and stood around him hoping he was going to be ok as no doubt every single one of them could relate to the kind of pain he was experiencing in that moment, at least on some level.

To his credit Pesce did not stay down on the ice for all that long, taking less than a minute to collect himself before heading back to the Carolina Hurricanes bench. That being said it was clear that Pesce was still in quite a lot of pain as he had to basically hobble his way back to the bench, and once there he continued to fidget around as if in an effort to shake off the pain. He would lean over the bench and even came back out onto the ice during the commercial break to try and fight through the pain and eventually it seemed to have worked. Somehow, in spite of the fact that he could have easily sat out the rest of the game with no one holding it against him, Pesce managed to return to action and has remained in the contest.