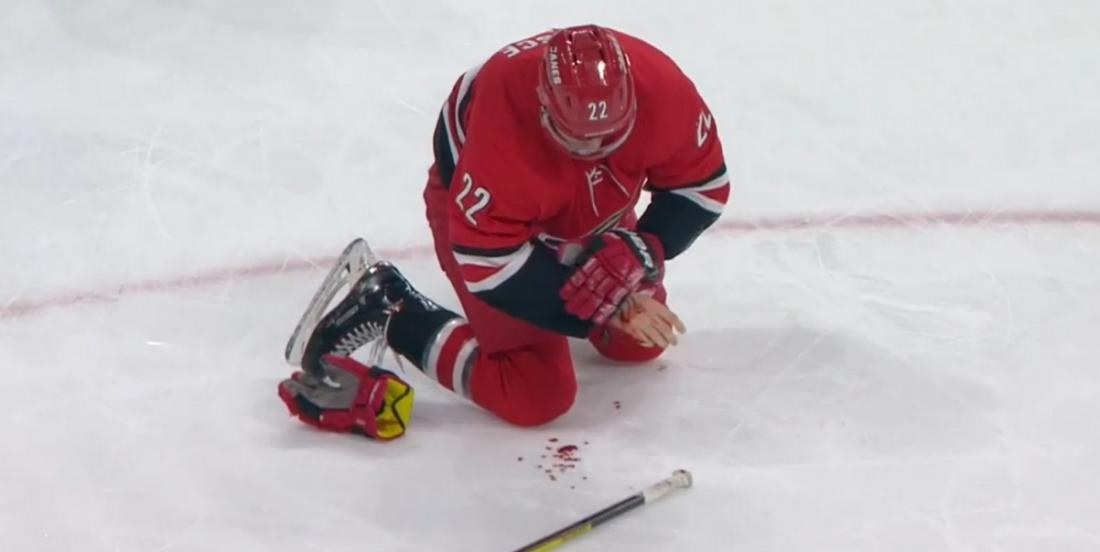 I gotta be honest I've got no idea what happened here but hopefully Carolina Hurricanes defenseman Brett Pesce is going to be ok.

Pesce was forced to leave the game on a hurry on Sunday during a match up between his Hurricanes and the Vancouver Canucks and he was forced to do so as the result of a rather bizarre injury, but one that seems to be relatively serious. The injury occurred in the final 5 minutes of the game's second period when the Canucks were mounting an offensive onslaught on the Canes, but as is often the case with players in the National Hockey League Pesce put himself directly in the line of fire in an effort to minimize the scoring chances for the Canucks.

It was a relatively harmless looking shot from Vancouver Canucks defenseman Oscar Fantenberg that struck Pesce, and by harmless I mean only that Fantenberg did not get a full wind up before firing this one off to the Hurricanes net. The shot appeared to strike Pesce somewhere in the arm, and it was clear immediately that, in spite of the fact that it had avoided the vital areas of his body, this one had hurt the Canes defenseman quite badly. Pesce struggled to get back up on the ice and just a few seconds after the initial shot block we could see blood start to trickle down his arm, wrist, and hand and onto the ice.

I'm not sure exactly what could have caused the cut here, Pesce was wearing protective gear and was struck through his jersey, but there was a significant amount of bleeding going on which suggests to me that this was a relatively serious cut. The fact that Pesce was wearing all of his equipment also makes it difficult to ascertain where exactly the injury is on his body. Pesce looked like he may have been trying to squeeze his wrist, so I suppose that is where the cut could have occurred, however that is only speculation on my part at this time. It certainly would explain the sheer volume of blood that we saw in such a short time however.