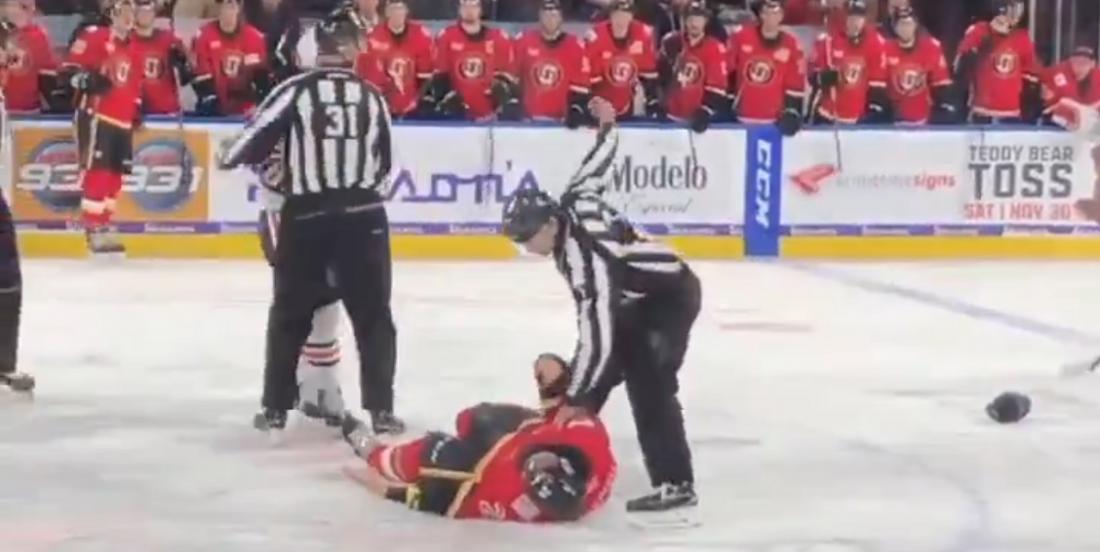 The battle of Alberta is one of the most famous rivalries in the entire National Hockey League. Due to their close proximity to one another, the Edmonton Oilers and the Calgary Flames have been bitter enemies for as long as most fans can remember, but you may not have known that their rivalry extends all the way down to the American Hockey League.

On Saturday night the Bakersfield Condors, the AHL affiliate team of the Edmonton Oilers, and the Stockton Heat, the AHL affiliate team of the Calgary Flames, and it was only a few minutes before things got nasty, really nasty in fact. Bakersfield forward Colby Cave was engaged in a puck battle along the boards and appeared to be completely distracted when Stockon center Martin Pospisil came in from behind him and gave him a relatively dangerous shove from behind along the boards.

Cave was fine after the shove, this in spite of falling forward to the ice, but it was clear that he was not about to take that kind of behavior from Pospisil. Cave immediately got to his feat and began to deliver some stiff cross checks to Pospisil in an effort to goad him into dropping the gloves. Pospisil appeared to be more than willing to go and after a few seconds of back and forth he dropped the gloves and engaged Cave man to man, it would prove to be one of the biggest mistakes of his career thus far.

Pospisil appeared to be getting the better of cave in the early going, throwing multiple blows at Cave's head from multiple angles, even appearing to land an uppercut at one point, but although it looked like Cabe was reeling from the onslaught he was merely biding his time. Cave was loading up for one big shot with his right hand, and when he let it fly it connected square on the jaw of Pospisil and sent the former Calgary Flames 4th round pick into another dimension.

Pospisil crumpled to the ice in spite of being held up by an NHL official and appeared to be completely out of it, leaving no doubt about who the winner of this clash was.

Here are some alternate angles: