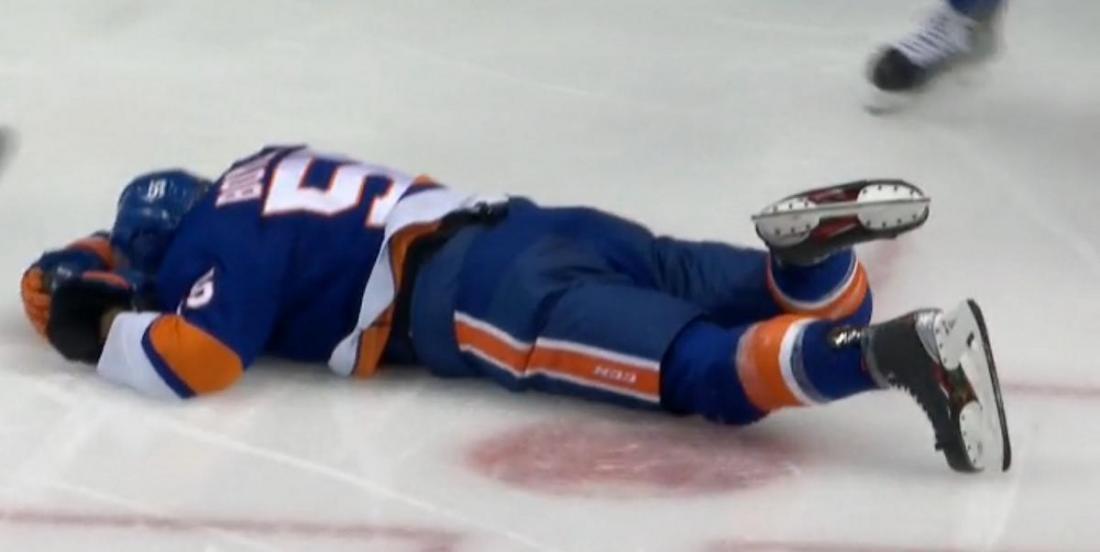 I must say I am glad the National Hockey League has introduced reviews on major penalty calls but this hit is proof that no matter how many times you review something you will never get agreement from everyone.

On Saturday the New York Islanders faced off against the Florida Panthers and during the second period of that contest there was a rather controversial call made by the NHL's officials. The call came after Islanders defenseman Johnny Boychuk was skating through the neutral zone and dumped the puck deep into the Panther's zone. Seemingly several seconds after Boychuk had dumped the puck he was leveled by a hit to the head courtesy of Florida Panthers defenseman Mike Matheson, resulting in a major penalty being called.

After watching the slow motion replay several times it appears that Matheson does indeed target Boychuk's head, which appears to also be the primary point of contact. On top of that there is the question of whether or not the hit was late, and there's also strong evidence to suggest that Matheson launches himself up and into the hit, although I do not believe his skates left the ice prior to contact being made.  Despite this being a clear hit to the head however the NHL determined that the major penalty would be overturned and the Islanders were instead awarded a 2 minute power play rather than the 5 that was initially called on the ice.

It has to be a sore spot for the Islanders and their fans who saw what Boychuk's face looked like when the camera panned over to him on the bench, the poor man looked like he was on another planet. Boychuk appeared to be seeing stars but that may have been compounded by another collision he was involved in earlier during the game. Whether or not the right call was made is of course subjective so check it out for yourself:

As I mentioned earlier in the article Boychuk was also roughed up earlier during the course of the game and I have to wonder if that may have played a role in how shaken up he was after this second collision. Earlier in the game Boychuk fell awkwardly into the boards and appeared to be favoring his back after falling awkwardly to the ice. Boychuk seemed completely out of it when the camera showed his eyes on the Islanders bench following the Matheson hit, and I wonder if his brain might not have already been a little rattled after the first fall into the boards, compounding the issues caused by the hit from Matheson.