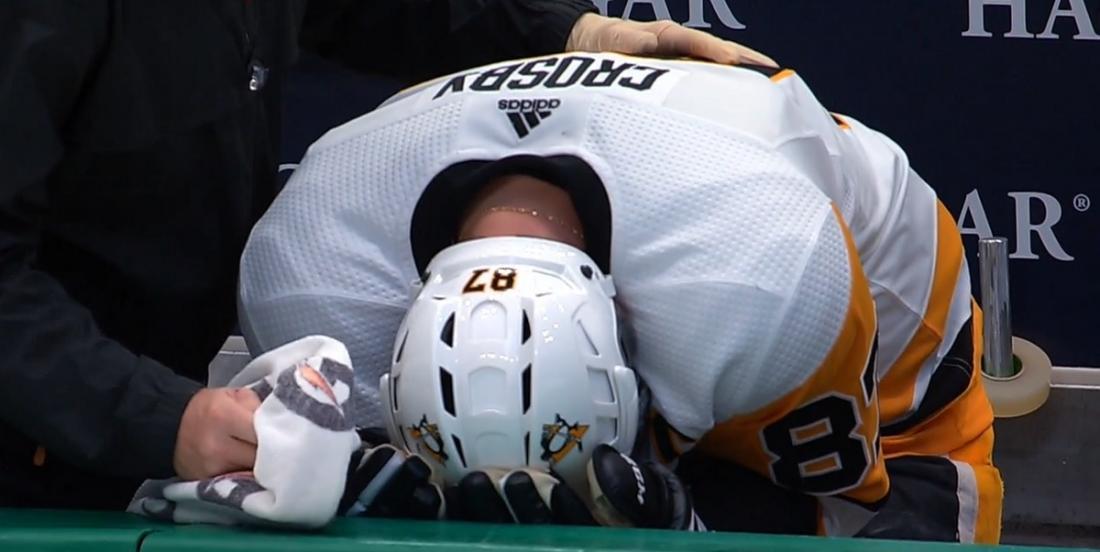 The second period has just ended in disaster for the Pittsburgh Penguins.

It is hard to provide much detail on the status of Penguins captain Sidney Crosby given that this incident took place in the dying seconds of the second period, but it certainly looked bad on the bench. Crosby appears to have been injured after he took a hard shot right off of what appeared to be his ear courtesy of Pittsburgh Penguins teammate Kris Letang. Now getting a slapshot to the ear would suck even under the best of circumstances, but this was a full wind up from Letang and the fact that it comes from a Penguins defenseman, or any teammate for that matter, has to feel terrible for Crosby.

Crosby took the shot off the side of his skull and immediately went down while clutching at his head in what appeared to be considerable pain. The good news here for Penguins fans is that the Penguins star was able to make it make to the bench under his own power, but once he got there things somehow managed to look even worse. Crosby could be seen hunched over on the bench with both of his hands firmly wrapped around his head, and he was rocking back and forth as if he was making an attempt to shake off the pain in his head.

Here's a look at the shot:

Now I do not believe there is such a thing as karma in the universe but if it were a thing then certainly it played a part in Sidney Crosby taking that shot to the head tonight. You see Crosby had also injured a player in the game with a shot of his own when he fired a rocket off the face of Dallas Stars defenseman Esa Lindell. That shot from Crosby left Lindell's face an absolute messand the Stars defenseman would only return later in the game and was seen wearing a full visor when he got back on the Stars bench.

Hopefully Crosby is going to be alright but we may have to wait a little bit for an update from the Penguins given that this has just transpired.