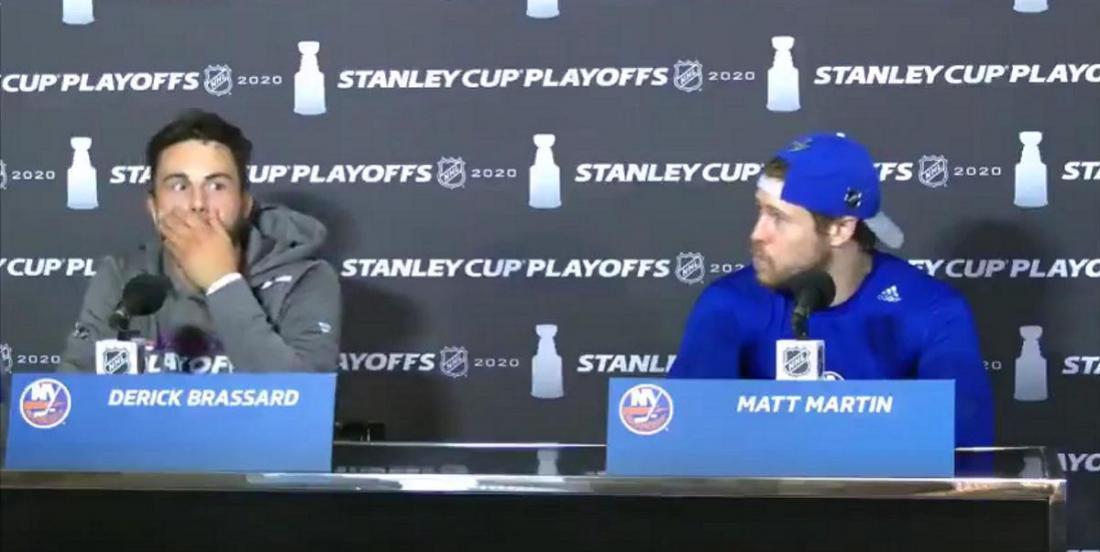 On Sunday night the New York Islanders picked up another big win in their series against the Philadelphia Flyers and as you would expect following the game reporters had a ton of questions for the players on both teams. There was however a moment during the Islanders post game availabilities that stood out for me and that was all thanks to the aforementioned Islanders forward, Derick Brassard.

You see Brassard is French Canadian and was born in Hull, Quebec so sometimes he will get questions from French speaking reporters who cover the sport in the province on Quebec. That was exactly the case this time around with Renaud Lavoie of TVA Sports asking Brassard a question in French, but just before asking his question Lavoie also politely said hello to the other man that was at the podium taking questions, Islanders forward Matt Martin.

Brassard, knowing that Martin had understood nothing but his name given that he doesn't speak French, proceeded to tell Martin that the question was actually being directed at him and that he should pay attention. Martin immediately began to look like a deer caught in the headlights and eventually started looking around the room for someone to rescue him. Brassard however was loving every second of this and kept the prank going for several seconds, even having to cover his face at one point to choke back the laughter that was no doubt just waiting to burst out of him.

Here's the clip of the question from Lavoie as well as Martin's reaction to it.