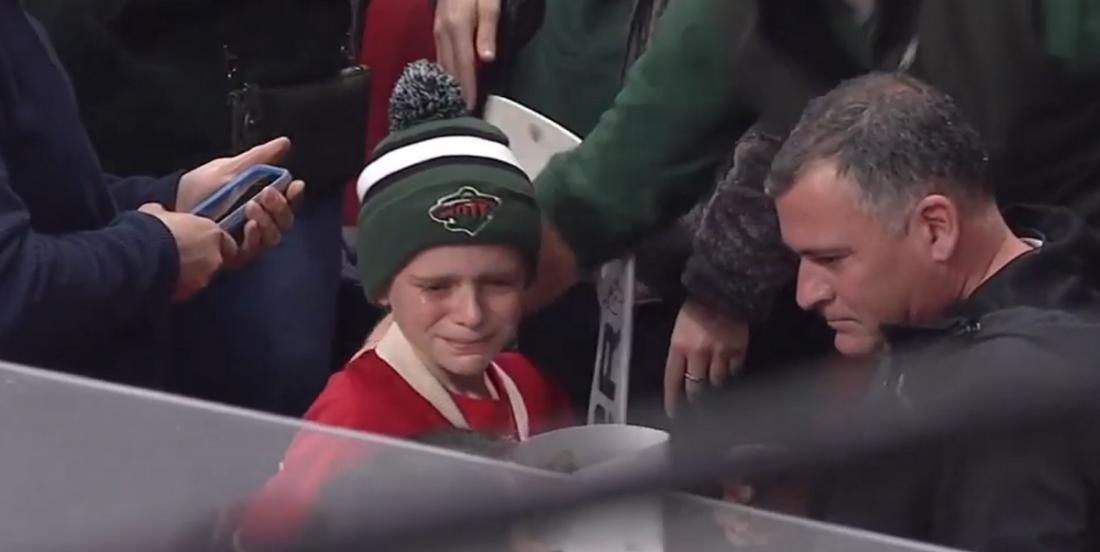 It's moments like these that always serve to prove that hockey players are simply the classiest athletes in the entire sports world.

On Saturday afternoon the Minnesota Wild faced off against the Ottawa Senators in what proved to be a hard fought, back and forth, battle between the two squads. The Wild would eventually triumph over the Senators by a score of 4 - 3 but although that was obviously existing news for the Wild fan base the real highlight of the game came after the final horn had already sounded.

As the Minnesota Wild were filing out to the locker room after their big win over the Senators one hopeful fan held out a sign that we could not quite make out, but I presume that it was directed at Minnesota Wild star goaltender Devan Dubnyk. That is because when Dubnyk saw the sign he not only stopped to acknowledge the young fan that was holding it up, but instead went well above and beyond the call of duty and gave the young man a moment he will never forget.

Dubnyk signaled to someone outside of view of the cameras and suddenly he had a marker in hand and began to write on his stick, presumably producing a personalized message of some kind or producing an autograph for the young fan who was holding up the sign. It was a small gesture from Dubnyk, one that took only seconds out of what must be a very busy day for him, but the reaction it produced was anything but small.

As Dubnyk handed the young man his game used stick the young man burst into tears, this in spite of the fact that you could tell the young man was trying to control his emotions, and it was truly a beautiful moment. Things got even better from there however as the crowd began to erupt in cheers and applause around him, one man stood stoically looking down at the young man. I presume that this man was the young boy's father as he, upon seeing the child's teary face, could be seen wiping a tear from his own eye as well.

No doubt Dubnyk has created a pair of lifetime fans with this simple, but amazing, gesture.