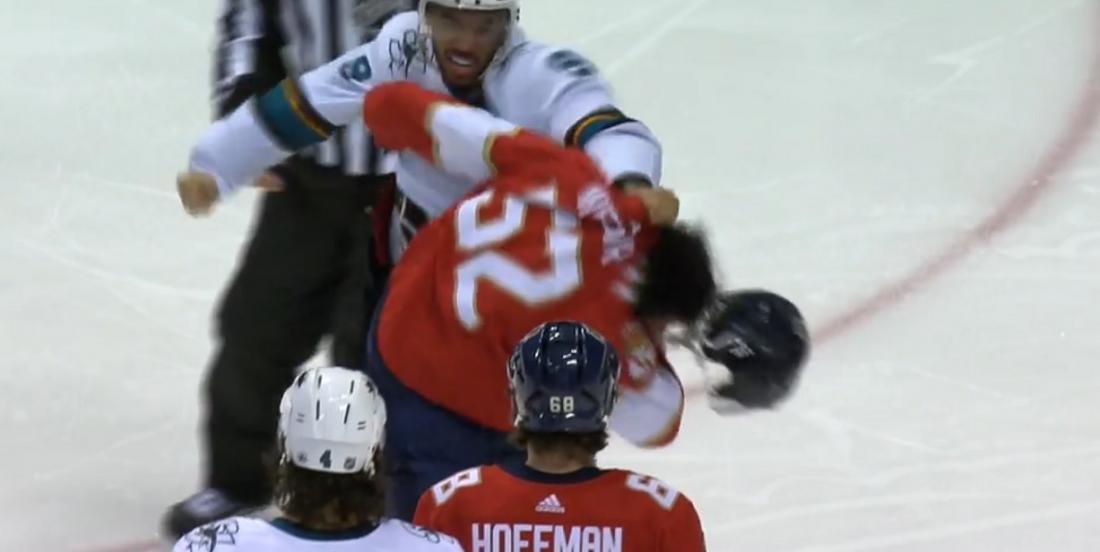 I think it is safe to say that San Jose Sharks forward Evander Kane felt more than a little slighted by a hit he received from Florida Panthers defenseman MacKenzie Weegar on Sunday night.

Kane and the Sharks were in Sunrise, Florida on Sunday where they faced off against Weegar and the Panthers and unfortunately for the San Jose Sharks it seemed to be a pretty poor outing for them overall. Not only were the Sharks all the way across the country but they traveled all the way just to be largely dominated at the hands of their coastal rivals. The Panthers took an early lead and never really looked back, but the bad times for the Sharks were not merely limited to the scoreboard.

It was only minutes into the game before Panthers forward Mike Hoffman gave Sharks defenseman Erik Karlsson a piece of his mind, all the while roughing him up by dragging him around via his jersey of course. That was almost assuredly a product of the issues between the two players, and their wives, stemming from the time they were teammates on the Ottawa Senators and things only continued to deteriorate for the Sharks from there.

The aforementioned Evander Kane was leveled by a big hit from Weegar at center ice, one that Kane obviously did not like. To be fair to Weegar here this did not appear to be a particularly dirty hit, although it seems fair to suggest that Kane never saw him coming, and he also appeared to drive through Kane's shoulder on the play which indicates to me his intentions here were good. You can review the hit yourself here in slow motion:

The hit may have been a good one but Kane did not like it one bit and the next time the 2 men where on the ice together it was obvious that Kane had bad intentions on his mind. The Sharks forward charged directly at Weegar who was very far away from the play at the time and immediately got in his face, looking to force Weegar into a fight. Initially it looked as though the Panthers forward would not accept, but after a healthy bit of encouragement from Kane the two finally went at it.

Here it is again with a different angle: