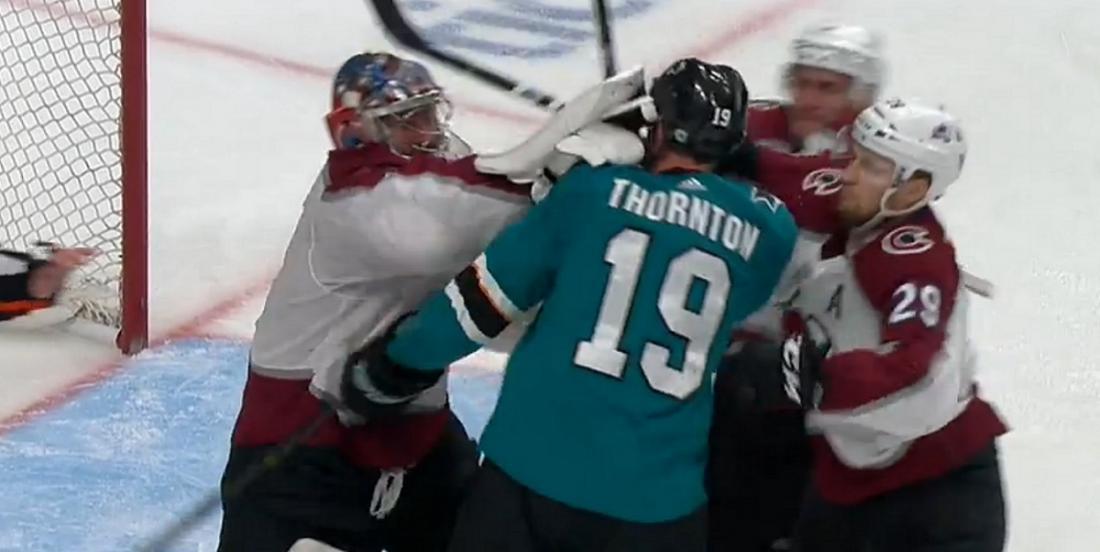 Things are heating up in Game 5.

The intensity in this series appears to have taken a noticeable jump for Game 5.

On Saturday night the San Jose Sharks and the Colorado Avalanche faced off once again for the 5th game in their second round series in the 2019 Stanley Cup Playoffs and the fans in attendance in San Jose were treated to one hell of a game. It was a back and forth affair between these two teams and that likely helped to create the intense atmosphere that was formed after just a few minutes had been plated in the game. Another source of frustration for the players was likely the performance of both San Jose Sharks goaltender Martin Jones and Colorado Avalanche goaltender Philipp Grubauer, both of whom had some truly highlight reel saves in this one.

By the time the third period had rolled around both teams were completely fired up and even between the plays the back and forth between the two benches was audible, prompting National Hockey League analyst Pierre McGuire to state that this was the most intense he had seen the Sharks during the 2019 Stanley Cup Playoffs thus far. That became readily apparent when both San Jose Sharks forward Joe Thornton and Colorado Avalanche goaltender Philipp Grubauer lost their cool.

Grubauer went behind his net to make a play and along the way he decided he would give Jumbo Joe a little shove in the back, but Thornton was having none of it. Thornton responded in kind by giving Grubauer a stiff whack of his stick in the back and that was all that it took to set off the Avalanche goaltender. Grubauer began taking swings at Thornton although his goaltending equipment was clearly making that difficult for him. He did however connect with one decent shot to the face of Thornton and then, as if seeing Thornton's weakness for the first time, Grubauer began to yank on Thornton's beard in the scrum.

Given the body language here I do not believe that this was just two guys playing mind games, I think the intense atmosphere got to both of them, and I can't wait to see if we get more between these two before the series is over.