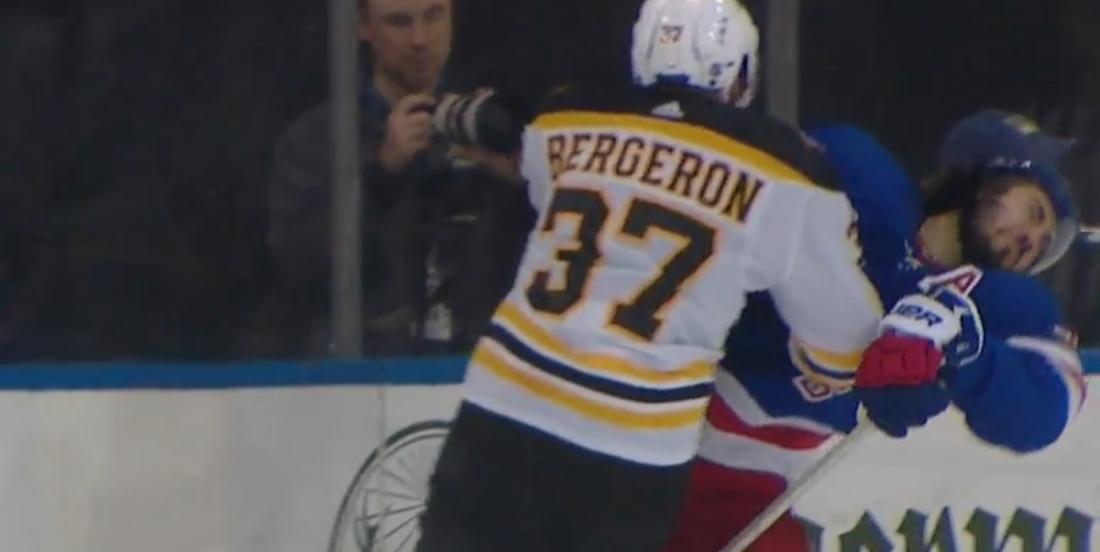 The New York Rangers will be without one of their top stars for the remainder of tonight's matchup against the Boston Bruins.

According to an official announcement directly from the New York Rangers themselves, star forward Mika Zibanejad has suffered an upper body injury in the first period of tonight's contest. Although the Rangers have not disclosed the nature of that injury or provided an details regarding when it occurred, I think it is safe to say that it has come as the direct result of a huge hit courtesy of Boston Bruins' star forward Patrice Bergeron.

Bergeron delivered a thunderous body check to Zibanejad in the final moments of the game's very first period and what may have made it a particularly bad impact for Zibanejad is the fact that he did not appear to be expecting the contact at all. For one Bergeron is not known as a particularly prolific hitter and on top of that Zibanejad appeared to be focused on the puck prior to the contact being made, seemingly only noticing Bergeron at the very last minute.

New York Rangers insider Larry Brooks has categorized this hit as a potential elbow to the head, but I think you will agree with me here that based on the replay Brooks' take here is absolutely ludicrous. I don't want to call him biased as he may have only seen the play from an unfavorable angle but to suggest that Bergeron got his elbow up here more that a little absurd.

Now it may be fair to suggest that Bergeron's shoulder does end up catching Zibanejad high, the Rangers forward had his head way down when contact was made, but as you will see in the slow motion replay here Bergeron himself clearly makes an attempt to come in at a very low angle and drives through the chest of Zibanejad.

The Rangers forward was very slow to get up following the hit but he would remain in the game and even took another shift before the end of the period which leads me to believe that this may be a head injury, and more specifically a concussion. That is only speculation on my par at this time however so stay tuned for an official update on the Zibanejad injury.

Here's a look at the play in real time: