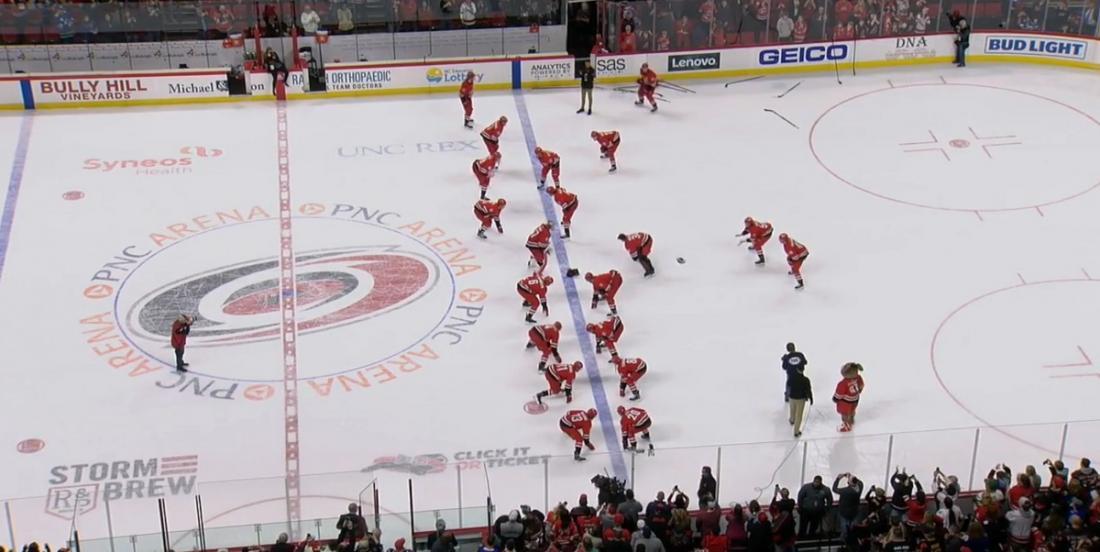 The Canes do something special on Superbowl Sunday.

There were very few games on the schedule on Sunday and all of them took place much earlier in the day than you would have expected. It is a shrewd move on the part of the National Hockey League, a league that knows most sports fans will not be tuned in to the NHL this evening but instead will be glued to their television sets for Superbowl Sunday. It is an event that truly transcends the sport, one that even many non-sports fans participate in purely due to the fact that it is a good reason to party and eat good food.

The players themselves are of course acutely aware of this phenomenon as well and on Sunday the Carolina Hurricanes decided to do a little something special for their fans who tuned in to their afternoon game ahead of the Superbowl. The Hurricanes have made their post game celebrations a staple of their wins on home ice and this time around they had something extra special prepared for their fans. This time the "Storm Surge" as it has become affectionately known was very much a National Football League themed event, complete with a pigskin football on the ice and all.

The Hurricanes players all lined up at the blue line just like you would see football players in the NFL lining up at the line of scrimmage and they then proceeded to run a full on play, although I must admit that the defense was not trying very hard. The end result was a pretty decent spiral being thrown through the air, a good recovery after a pretty sloppy snap to the quarterback, followed by a catch and a spike of the ball onto the ice for good measure. This in my opinion was one of the more creative and one of the better Storm Surges that we have seen out of the Hurricanes so far this season, and the fact that it was done in the shadow of the Superbowl later today only added to the quality of that celebration.

Here's a short replay of the Storm Surge so you can see and judge for yourself.