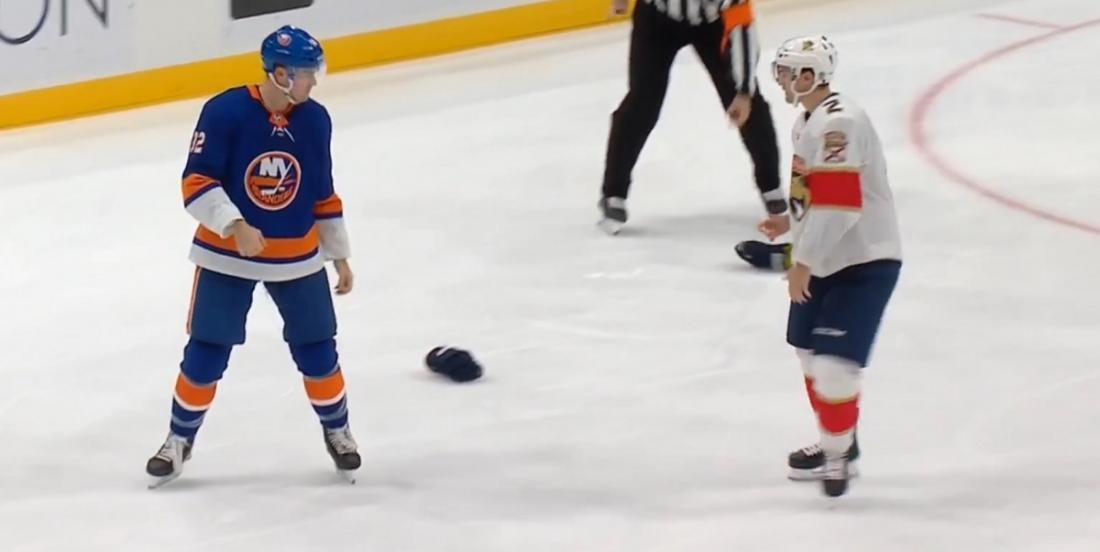 Johnston takes it to the Panthers.

If you're a fan of the New York Islanders it has to be pretty difficult not to fall in love with Ross Johnston after a rather strong physical performance on Saturday night.

Johnston and his Islanders welcomed the Florida Panthers to the Nassau Coliseum on Saturday night and overall it turned out to be a pretty good showing from the Islanders. Not only did the Islanders pick up their second win of the season by eventually beating the Panthers by a score of 3 - 2 but the aforementioned Johnston also sent a pretty clear message during the third and final grame of the game, he is not to be messed with.

The Islanders came into the third period with a one goal lead but rather than attempt to simply cruise to a victory the journeyman forward brought a ton of gusto to one of his first shifts of the period. Although it did not appear as though his Islanders needed a spark, Johnston set the tone early in the third when he leveled Florida Panthers center Noel Acciari with a huge hit behind the Panthers net. It was a hit that Acciari would take objection to, after the Panthers forward picked himself up off the ice he immediately went after Johnston.

At first it looked as though Acciari wanted a piece of Johnston as he began delivering some stiff cross checks to the back of the Islanders forward, but at the end of the day Acciari opted not to drop the gloves. Johnston unsurprisingly did not much enjoy taking some lumber to the back of his spine and he quickly went back after Acciari as well. That was when Acciari's fellow Florida Panther, Josh Brown, stepped in to intervene on his behalf.

It would be a decision that Brown would likely come to regret as he appeared to be absolutely no match for Johnston in this one. From the very moment the two men dropped the gloves it looked like Johnston was not only brimming with confidence, but eagerly anticipating the opportunity to inflict some damage on his opponent. That is exactly what he did as well, landing several heavy shots in what appeared to be a very one sided affair.