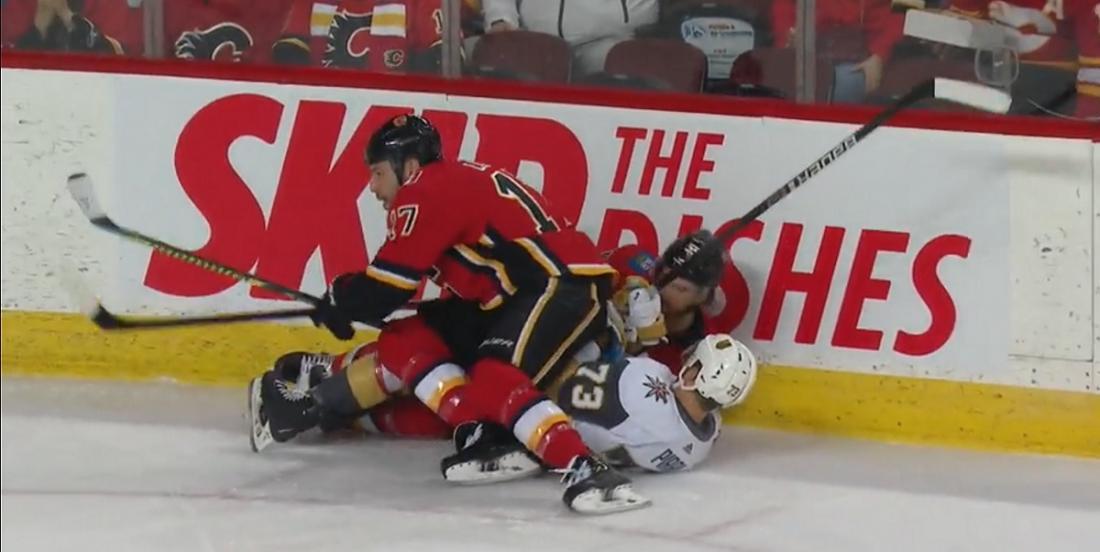 Tough break for the Flames.

It is one thing for Milan Lucic to be eating up a ton of cap space on the Calgary Flames roster, a frustrating situation for fans of the team no doubt, but it is another matter entirely when he takes out a core piece of the organization's blue line while out on the ice.

On Sunday night Lucic and the Flames were facing off against the Las Vegas Golden Knights and in the games very first period Lucic had a major blunder in which he took teammate Noah Hanifin right out of the game, presumably injuring him in the process. Lucic of course did not deliberately take out Hanifin, and in fact I think you would be hard pressed to blame him for his actions at all, but given the existing frustration that surrounds the players this is going to be a tough pill to swallow.

Hanifin was injured when Lucic saw an opportunity to level a vulnerable Brandon Pirri while Pirri was looking to make a play on the puck along the boards. Lucic was chasing down that very same puck and when he reached Pirri he simply bulldozed the Golden Knights center down to the ice, but that is where the trouble with Hanifin came in. Hanifin was also trying to make a play on that very same puck and by the time that Lucic had reached the puck Hanifin was positioned right behind Pirri, resulting in him being pancaked between the boards, Pirri, and a charging Lucic who had a ton of momentum behind it.

It looked almost as though the two Flames players were attempting to sandwich Pirri between their bodies, but based on the body language fro Hanifin on this play I suspect that he had no idea that the hit from Lucic was coming. In fact I suspect that if Hanifin had braced himself for the impact of the hit he would have been fine here, and it would have been Pirri that would have been rocked on the play instead. Unfortunately for the Flames that was not the case and as of the time of this writing Hanifin has not returned to the game.