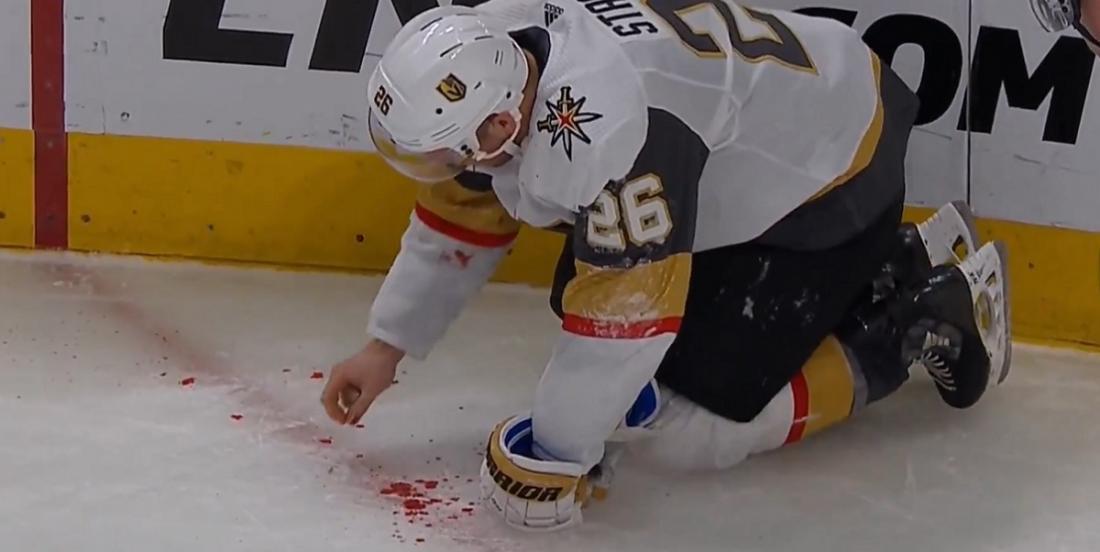 Good god this one looks like it hurt real bad.

On Saturday night the Las Vegas Golden Knights faced off against the Montreal Canadiens and fans were treated to a pretty wild game. After the Canadiens jumped out to an early 3 - 0 lead in the game's very first period it looked like this one was all but over, but the Golden Knights clawed their way back into this one, eventually forcing an overtime frame. That effort and that extra frame of play however only led to disappointment for the Golden Knights and unfortunately for Golden Knights forward Paul Stastny it also led to a rather gruesome injury.

The game was all tied up at 4 goals a piece and there was roughly 1:20 left on the game clock when Stastny suddenly decided he wanted to eat a puck for dinner. Stastny lost a battle for the puck in the Canadiens zone and that resulted in a clearing attempt from Habs forward Joel Armia, a clearing attempt that got about a foot before being deflected by Stastny's face. It didn't appear to be the hardest shot in the world but given the very short distance the puck had to travel from Armia's stick to Stastny's face I suspect this one hit him with quite a bit of force.

If the damage on Stastny's face was any indication the puck did in fact hit him with a good amount of force, leaving him with a big gash above his lips. One thing was immediately clear and that was the fact that Stastny was leaking all over the ice, leaving a crimson trail on whatever part of the ice he moved his mouth over. What was not immediately clear was the fact that Stastny appears to have lost a few teeth as a result of this incident and I know this because we got to watch the poor man picking his own teeth off the ice. I could not tell how many of his chiclets were dotting the ice but it looked like Stastny went it for a few scoops so I suspect it is more than just one.