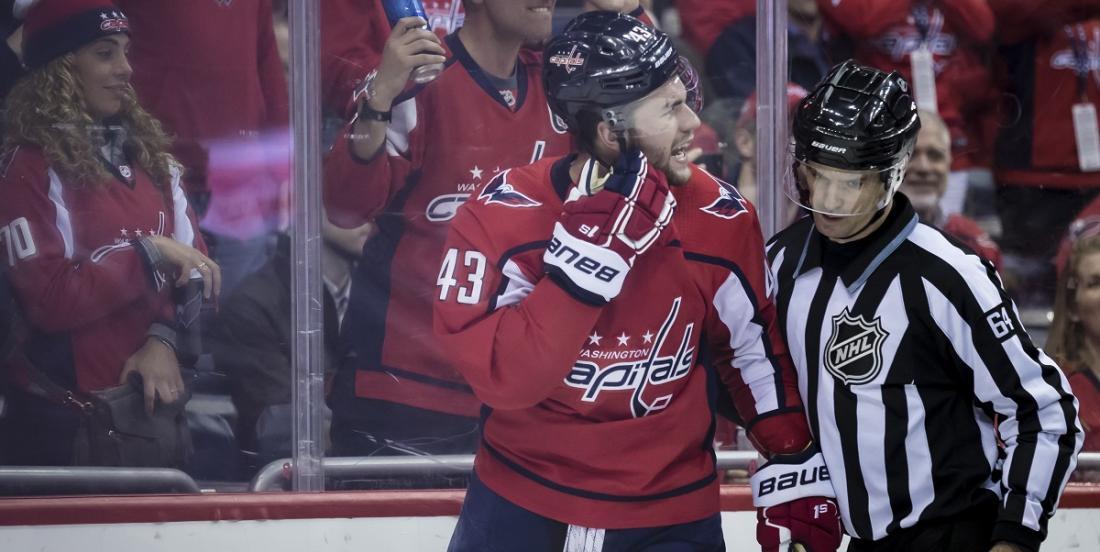 W/ilson in big trouble this time.

It appears Tom Wilson has landed himself in hot water, at least that is what one National Hockey League beat writer is claiming. Whether or not that actually matches reality still seems to be somewhat in the air at this time.

Wilson and his Washington Capitals were in Raleigh, North Carolina on Sunday afternoon where they were set to face off against the Carolina Hurricanes and their newly appointed captain Jordan Staal. The game very much had a regular season atmosphere to it given that many of the NHL regulars on both sides of the ice suited up for this one, but it was during the second period that tensions seemed to boil over in front of the Hurricanes bench.

At the center of it all was Tom Wilson, shocking I know, something that the Capitals tough guy loves to do and it seemed like this time he was prepared to take on every member of the Hurricanes bench. Remember it was the Carolina Hurricanes who seriously injured T.J. Oshie late last season and it seems like some of the hatred from that incident definitely carried over to the 2019 - 2020 NHL season. There was not much of anything happening though, it just seemed like the players were doing a whole lot more talking than anything else, and suddenly Wilson was being escorted off of the ice and back towards the visitor's locker room.

This is where the confusion comes in. According to a report from Carolina Hurricanes beat writer Sara Civian, Wilson was "ejected from the game for shoving a ref," but outside of Civian, who is a Hurricanes reporter after all, I can find no evidence to corroborate this claim. what makes it all the more confusing is that we now have video of the incident in question and, although Wilson does seem to flail somewhat when the NHL officials put their hands on him, there is nothing in the video that could be considered a "shove" in my opinion.

Furthermore when I look at the official scoresheet for the game there is no indication that Wilson was ejected from the game, although he did receive a 10 minute penalty. Again I doubt this was for "shoving" the officials, and more likely it seems like the officials were going above and beyond what they would do in a regular season game, to cool things down in the preseason.

What do you guys think? Did he shove the referee?

Update: Civian is now being called out for lying about the incident and is not responding very kindly to the Capitals fans who are understandably upset one of their players was falsely accused of attacking an official.

She had another nasty tweet directed at the Capitals fan base but that has, wisely, been deleted. Everyone makes mistakes and Civian is usually a very good reporter, and for that reason I would encourage you not to judge her solely based on this one incident. That being said I can also acknowledge that this is not a good look.