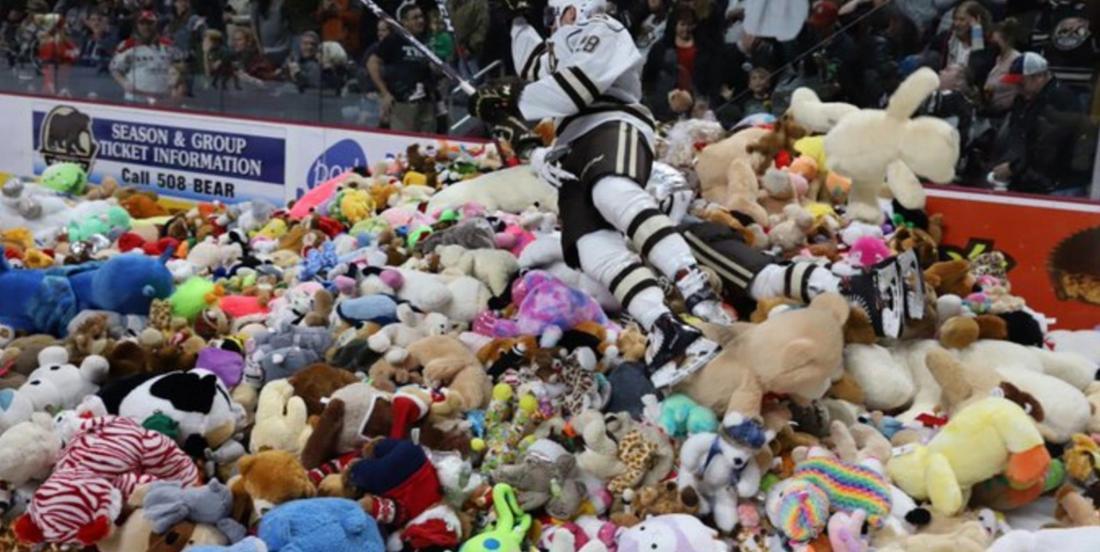 The Hershey Bears of the American Hockey League have just set a brand new world record.

I knew it was going to be a big number when I saw the bears starting raining down in what could only be described as a torrential downpour of stuffed animals on Sunday night, but I truly had no idea just how big that number would be. According to an official announcement from the Hershey Bears themselves it appears as though their annual Teddy Bear Toss, which was held this evening in Hershey Pennsylvania, has just established a brand new world record for the number of bears donated at such an event.

According to their count there were a total of 45, 650 bears that were donated tonight, all of which will be now going to local charities to serve the greater good. Presumably these stuffed animals will be donated to children in need during the holiday season, and the thought of just so many little kids waking up with a big smile on Christmas morning thanks to the generosity of all the great fans in attendance this evening just warms your heart.

The best part about the whole event is that everyone in attendance appeared to be having a great time, including both the fans who were in attendance and donating the bears and the players on the ice who were finding all kinds of ways to entertain themselves with the stuffed animals that were suddenly flooding onto the ice. The players from the Hershey Bears were spotted posing in giant piles of stuffed animals or diving into them at full speed knowing full well that they would be in for a very padded landing on the way down. It's almost like they were just a bunch of big kids having a whole lot of fun out there on the ice.

Here's a look at some of the players enjoying some stuffed animal furniture.

And a short clip of some of the players going for a dive in a huge mountain of stuffed animals.

And of course if you missed the actual toss itself you can see it right here in the short video below.