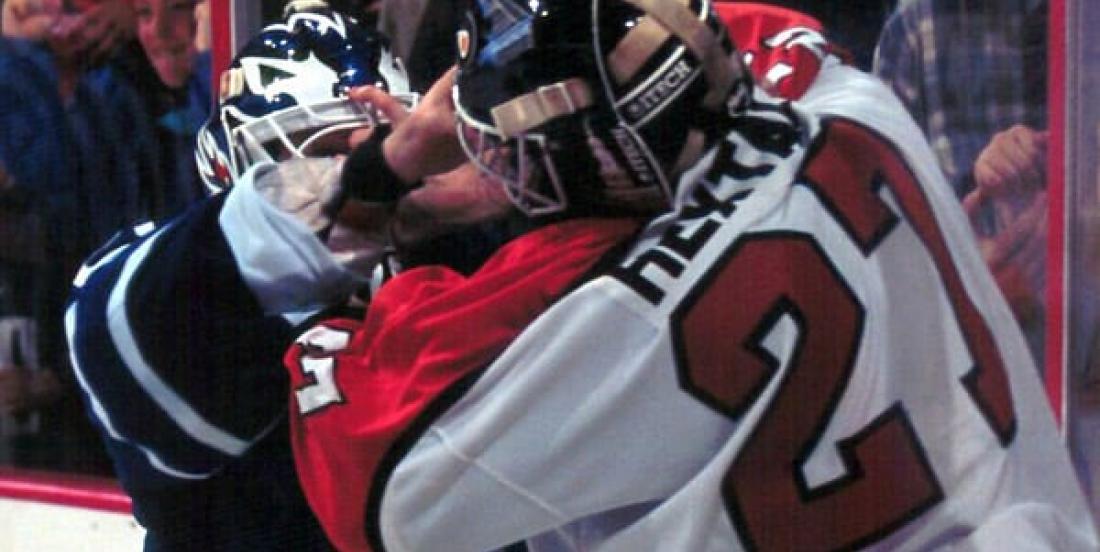 It is not easy getting your hockey fix these days but today we have got one of the all time classic showdowns for you.

For this one we take you all the way back to November 10th of 1996 for a regular season matchup between the Toronto Maple Leafs and the Philadelphia Flyers during the 96 - 97 regular season. The Flyers had gotten the better of the Maple Leafs in this one, with the Flyers holding a commanding 3 - 1 lead in the dying seconds of the 3rd period, but it was then that Toronto Maple Leafs goaltender Felix Potvin pulled a rather dirty trick out of his hat.

Potvin delivered a stiff slash to the legs of Philadelphia Flyers forward Daniel Lacroix and it was somewhat comical to be honest because it was exactly the kind of thing you would have expected to see from the other goaltender on the ice, Philadelphia Flyers goaltender Ron Hextall. Hextall at the time had a reputation as one of the true bad boys of hockey and when he saw the opposing goaltender going after one of his players like that so late in the game, I don't think there was anyone who could have stopped Hextall from looking for some revenge.

The slash from Potvin led to a big melee on the ice between the Maple Leafs and the Flyers but Potvin, despite having been the one to set the whole thing off, was relatively untouched as players from both teams paired up with players from the opposing team. That was when Hextall came charging down the ice to give Potvin a piece of his mind, and a few fists to the face for good measure as well, leading to one of the most epic goalie clashes that we have ever seen in the history of the NHL.

To his credit Potvin held his own against what was one of the most intimidating men in hockey at the time and before the officials ever had the chance to step into this one both men were exhausted. It may even be that the two earned a mutual respect for one another on that day as this one seemed to end in a stalemate.