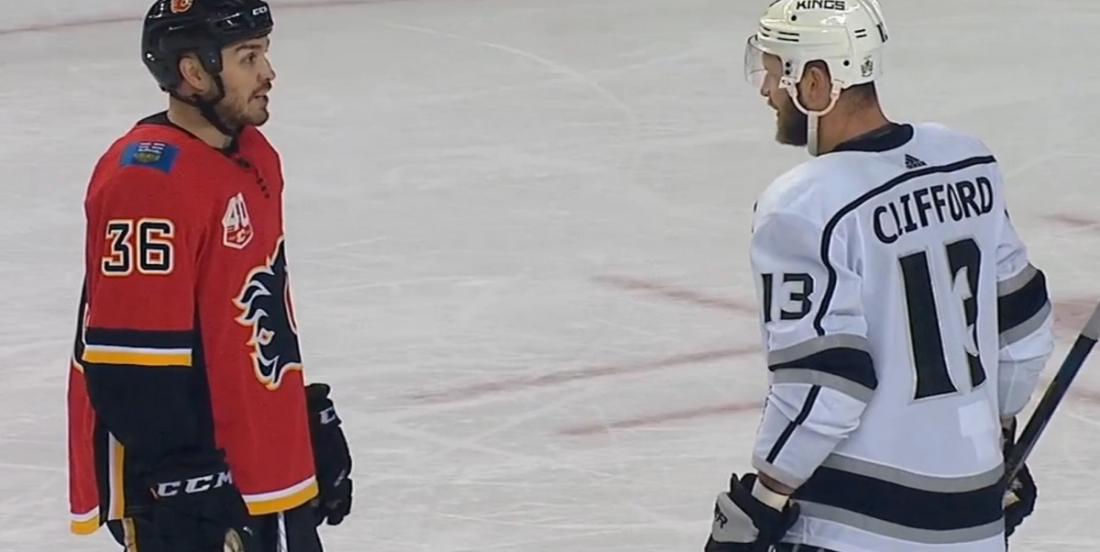 These two did not want to wait.

This is something of a unique situation and if you listen to Calgary Flames forward Zac Rinaldo tell the story it was a rather unique moment for him as well in spite of all the incidents he has been involved in during his NHL career.

On Saturday night the Calgary Flames and the Los Angeles Kings renewed their bitter rivalry when the Kings came to town to pay a visit for Saturday night's late game in the NHL. Early on it looked like this one would be going the Kings' way but thanks to a very unlikely cast of heroes from the Calgary Flames roster the Flames were able to turn this one around and secure a victory, all while getting their shots in against arguably one of their most hated rivals.

Perhaps no one got under the skin of the Kings more on Saturday night however than Calgary Flames forward Zac Rinaldo. Rinaldo is notorious for his physical style of play, one that often crosses over the line of what is deemed acceptable in the National Hockey League, but on Saturday he brought both that brand of physical play as well as his talents as a hockey player to the forefront. Rinaldo picked up one of the Flames first two goals to help tie the game back up at 2 a piece, the other was scored by none other than Milan Lucic, but it was his hit on first year Kings' forward Nikolai Prokhorkin that really stoked the flames.

Rinaldo caught Prokhorkin battling for the puck along the boards and just flattened him with a huge hit, one that some have argued should result in a suspension for the repeat offender. There seems to be little question that Rinaldo launched himself upwards and into the hit prior to the contact being made and given his history I would lean away from giving him the benefit of the doubt, but there was no question his hit was effective.

Not only did it take Prokhorkin out of the game but it also resulted in another incident just moments later. An incensed Kyle Clifford immediately challenged Rinaldo to a fight, and would not even wait for the game to start again before getting what he wanted.

“I know Cliffy. Cliffy’s a great guy,” began Rinaldo before adding. “I know him but i knew I had to be accountable for that hit. I had no problem doing it. I didn’t think we were going to fight during the TV timeout. Because he asked me to go. I said ‘Cliffy they’re shovelling the ice we can’t go right now!’ He said ‘No we have to go, we have to go.’ I’m like ‘I don’t think we can go right now. It’s a TV timeout’ He said ‘No we’re going’ I’m like ‘F$%^ it let’s go. Alright, if you’re not going to get away from me then we’re gonna to have to do what we have to do.’ Yeah, that’s what happened”

Unfortunately the NHL officials on the ice were having none of it, and both men were quickly separated and may be looking at some hefty fines for their actions last night.