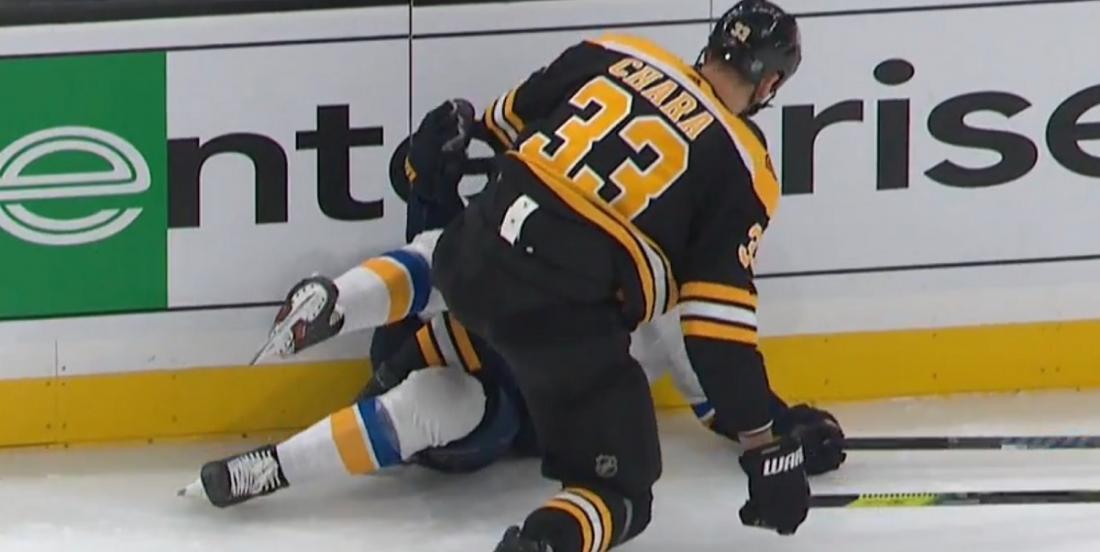 You just know that the Boston Bruins had painted a giant target on the back of St. Louis Blues forward Oskar Sundqvist prior to the start of this one, and if you were one of the people who doubted that this would be more than just your average regular season game that notion was quickly dispelled on Saturday night.

The Saturday night matchup between these two teams was of course a rematch of sorts of the 2019 Stanley Stanley Cup Final, although there was no Stanley Cup on the line this time, and it was obvious early on that there was still plenty of bad blood between these two squads. The opening 30 seconds of the game were relatively uneventful but it was at the 32 second mark that Bruins captain Zdeno Chara made his presence known, and did so in a major way that sent a very clear message to the St. Louis Blues.

Blues forward Oskar Sundqvist was attempting to move the puck out of his own zone when he was met at the blue line by the massive Chara, a very unfriendly Zdeno Chara at that. The Bruins defenseman immediately went after Sundqvist with a huge hit, one that stopped Sundqvist, who is not a small man by an stretch of the imagination, dead in his tracks. The message and the intent behind this hit were immediately obvious to anyone who had watched the Stanley Cup Final, this was the Bruins captain seeking revenge for a hit that had been laid by Sundqvist in the Final on Bruins  defenseman Matt Grzelcyk.

For those of you who don't remember the hit in question, it took place in Game 2 of the Stanley Cup Final and it left the aforementioned Matt Grzelcyk down on the ice for several long moments. There was no question that it was a hit from behind, and based on what happened tonight it seems like the Bruins have been waiting for payback.

Given the motive behind this hit I have to wonder if the National Hockey League's Department of Player Safety will take the time to review the check from Chara. I have to admit though it does not seem like there is much here, Chara's feet are on the ice at the point of contact and although his arms do come up high as he finishes the check, that seems more a result of his size that any attempt to target the head of Sundqvist.