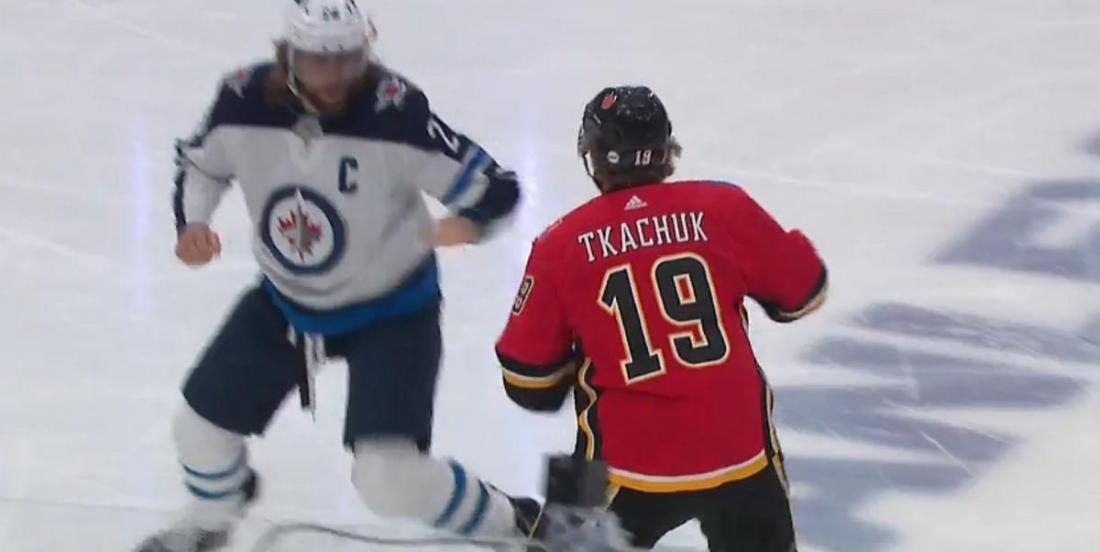 Revenge for the Scheifele injury?

Things got ugly early between the Calgary Flames and the Winnipeg Jets, and this may just be a precursor of things to come in this Qualifying Round series.

The Jets were dealt a big blow on Saturday when forward Mark Scheifele went down with a gruesome looking injury, one that occurred right after some relatively minor looking contact from Flames forward Matthew Tkachuk. I must admit that my initial read on this was that Scheifele himself caused the injury, with his forward momentum pushing him forward and resulting in his skate getting jammed along the edge of the boards, but some have suggested that the skate of Tkachuk may have played a role.

It seems the Jets certainly think that Tkachuk at least played some role in the injury as Jets captain Blake Wheeler was quick to challenge Tkachuk when both men were out on the ice together, an act that seemed clearly motivated by revenge for Scheifele. Tkachuk to his credit seemed more than willing to answer the bell however and he immediately dropped his gloves and went after Wheeler, and perhaps even got the better of the Winnipeg Jets captain.

It was a very short exchange with both men throwing multiple punches but with only 2 of those punches really connecting, one from each of the combatants. The last blow that was landed by Tkachuk however seemed to at least put Wheeler off balance and resulted in both men crashing to the ice which in turn quickly brought the National Hockey League's officiating crew in and put an end to the fight.

Whether or not Tkachuk was actually responsible for the injury remains to be seen, it may be that the Jets know more than we do at this time, but it also may simply be that they saw Tkachuk around Scheifele when he went down and merely assumed that some sort of foul play had come from the notorious Flames forward. We will need more camera angles than the ones we currently have to make a conclusive determination in that regard, but no doubt if there Tkachuk's skate is proven to have been involved in this injury we could be hearing from the NHL about it.