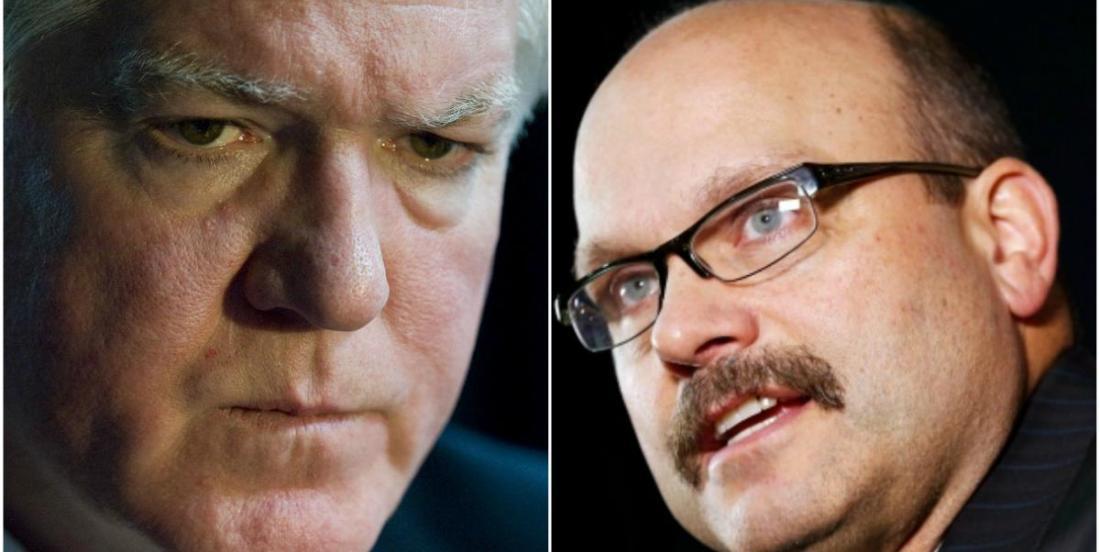 I'll start with a little honesty here, I do not think and never have thought much of former National Hockey League general manager Peter Chiarelli, so when I saw this story I couldn't help myself.

Former National Hockey League general manager Brian Burke has a book he needs to promote and as part of his book tour he is recounting some of his more infamous stories from his time as an NHL GM, no doubt in an effort to try and draw as much interest to his new book as possible. Unfortunately for the aforementioned Peter Chiarelli perhaps the most intriguing story to come out of Burke thus far on this promotional tour for his book has come at his expense.

In a conversation with Luke Fox Burke revealed that he had met with Chiarelli at a bar in Boston to work on the deal, but also goes into detail regarding how he effectively strong armed the Bruins GM into pulling the trigger on the deal. Burke had recently acquired his 2nd round draft pick back from the Chicago Blackhawks and used the threat of an offer sheet on Kessel to get Chiarelli to make the trade, at least that's how Burke tells the tale.

"I was in Boston with my kids. I said to (then Bruins GM) Pete Chiarelli, 'Let me buy a beer at The Fours at four o'clock.'" said Burke to Fox.

"One of the great sports bars ever in the world. So, Pete and I had a beer. I said, 'I want you to hear it here, because they're just going to register the deal. Now I got my second-round pick back.' So, I said, 'I think we've made the best offer.' We knew what Nashville’s offer was, or we were pretty sure we did, and L.A. got in very late. I said, 'Phil’s not going anywhere but here. He's coming here. I said, 'Pete, I’m gonna offer-sheet him tomorrow. I just got back my second-round pick. I'm not going to improve the offer. You make the deal tomorrow, or I’m gonna offer-sheet him.' He made the deal next day.

That trade of course would eventually turn into Tyler Seguin, Jared Knight, and Dougie Hamilton for the Boston Bruins, and even though those players are no longer on the roster today you would be hard pressed to argue that Chiarelli got robbed in this deal. In fact maybe the reason this trade worked out so well, unlike some of Chiarelli's other moves, is because he didn't actually want to make the trade. Burke admits that although he did get the better of Chairreli in the game of chicken that if he had a mulligan in his career this is the one trade he would like a do-over on. Burke of course could have never known that a collapse from his team would result in his picks becoming so valuable, and turning into players like Seguin and Hamilton, but that is in fact exactly what happened in this trade.

Burke may have been the bully, but Chiarelli can claim the victory on this one.