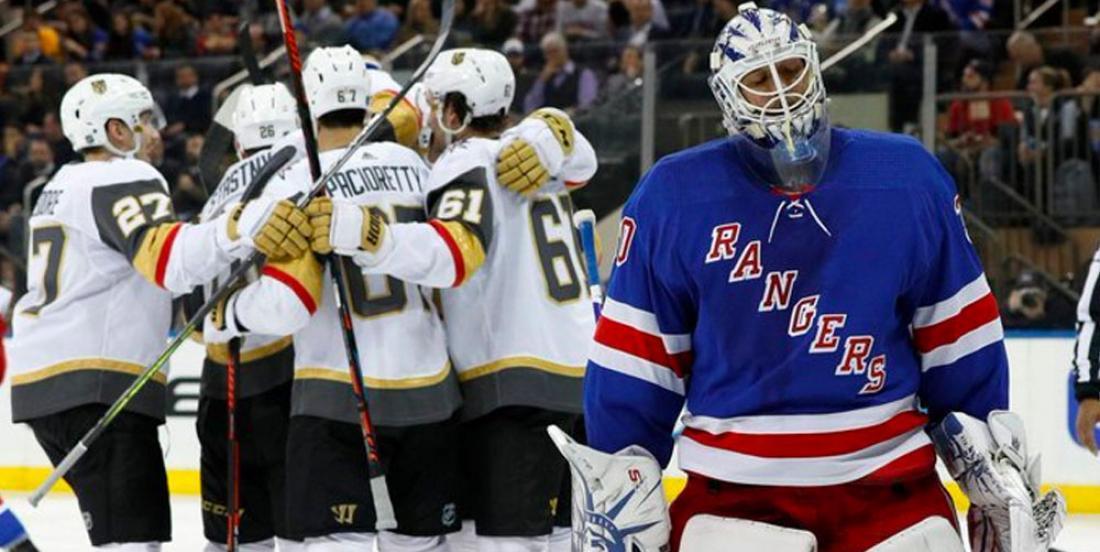 The start of a new month was hoping to be the start of a move in the right direction for the youngest team in the league. The schedule, which was incredibly sparse at the beginning of the season (3 games in 14 days), has now become brutal with the Rangers playing their 8th game in 12 nights.

Unfortunately, the Vegas Golden Knights were too much for the Rangers tonight. The game got out of control almost immediately with Vegas scoring two goals in the first 3:50. The Rangers did have two power-play opportunities but were not able to capitalize on either one of them.

Starting the second on the carry over power play drove the Rangers to have a very strong start to the period. They looked hungry and wanted the 2 early goals back. But miscommunication, and a terrible pinch by Haley, gave Vegas a breakaway that was finished by a beautiful move to the glove hand side of Lundqvist. If they continue to leave Hank out to dry, how will he build confidence?

The brain fart at the blue line was followed up by a Vegas PP goal 1:40 later. Head coach David Quinn had seen enough and called a timeout and It worked. The Rangers came back and worked hard for the rest of the period. A battle on the far side offensive wall led to some serious hard work by the 3rd line. Zibanejad pulled it out of the wall, snapped it to Trouba, who’s shot on goal was tipped in by Lemieux which is his 4th of the year.

The Rangers came out firing in the 3rd, with Kakko’s hustle drawing an early penalty. The Power plays looked crisp to start out the third. Players were snapping it tape to tape, but nothing was getting through. Even when Panarin serves up his bread on a platter, players (cough, cough...Kreider) can’t slam it home. Panarin’s frustration started to show as he slammed his stick into the bench, breaking it after the missed opportunity. All the effort wasn’t good enough though with Vegas’ backup goalie Subban on his game tonight.

The coaches have got to figure out how to get this team ready for the games. There are too many instances of this team giving up early goals in bunches that just takes them out of the game. Not every game can be a four-goal come from behind victory like they did against Montreal.

-Marc Staal is still out following ankle surgery on Nov 9th. Quinn recently said he is itching to get the veteran defenseman back in the lineup.

-The power play for the Rangers continued to be lackluster in this game, failing to score on six chances. They are now at a 18.8% conversion rate on the year which puts them in 15th place.

-With Mckegg and Staal injured, Boo Nieves was the only healthy scratch for tonight’s game.

-The Rangers play the second and final game of the year against Vegas on Sunday 12/8.